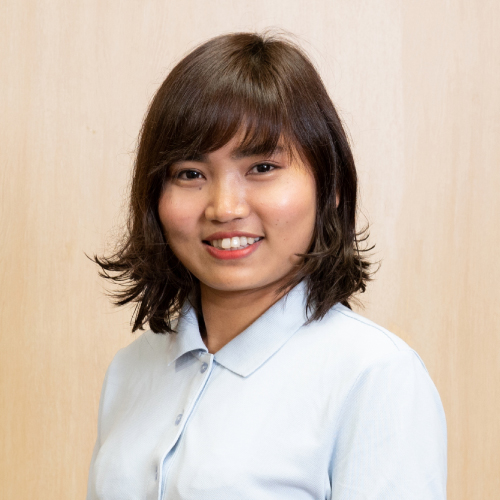 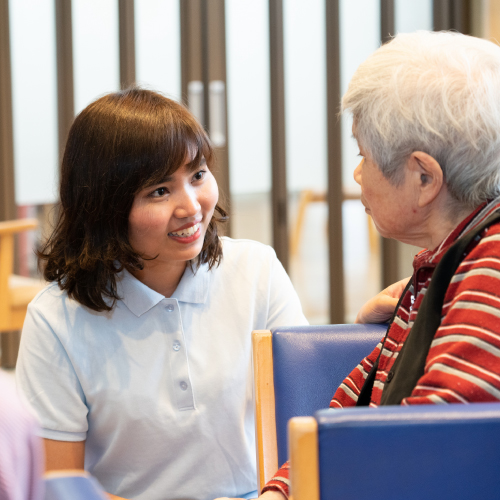 My job makes the elderly happy, which also brings happiness to myself

I work at a nursing facility that takes care of the elderly in their daily lives. I decided to take on this job, believing that it’s a wonderful job that makes the elderly happy. I also have a grandfather and a grandmother, so when I interact with the elderly at work, I interact with them sincerely as if they were my own grandparents.
Before coming to Japan, I studied and practiced Japanese nursing care at a school in Myanmar. The teacher was strict at that time, and I thought it would be a tough job. However, when I started working in Japan, I found that it wasn't as hard as I had expected. I can enjoy my work, as everyone, including the people around me and the elderly, are very kind.
There are times I help the elderly at work when they take their medications. I’m especially careful that time not to make any mistakes. When I first started working, I had a hard time creating reports and records that I had to write when something happened. It was difficult because I had to write sentences using Chinese characters. However, I now can manage it because everyone kindly taught me. 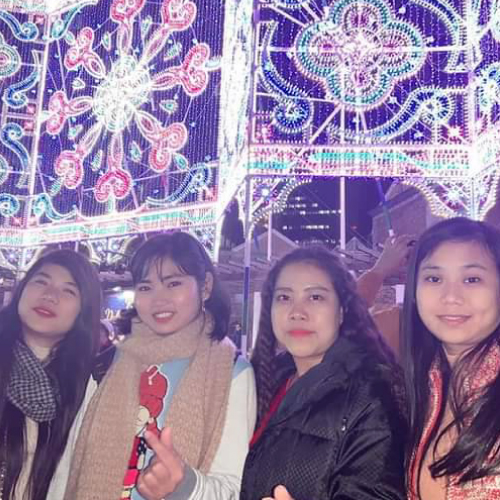 I first became interested in Japan a few years ago. When I was a university student, a friend of mine who got a job to work for a Japanese farmer told me, "Japan is comfortable to live in and offers a lot of jobs.” I then became interested in life in Japan. I went to a Japanese language school when the university was not in session to achieve this purpose.
I took the Japanese-Language Proficiency Test and passed it, starting from N5. It took about a year and two months to pass N3. While studying Japanese, I was looking up what kind of work there is in Japan on pages on Facebook. There were jobs, such as work at factories, selecting chicks, making lunch boxes, and nursing care. I decided to pursue a nursing care job, believing that it’s a wonderful job that makes the elderly happy.
I then studied at a school in Myanmar, where I could study Japanese nursing care. I had studied English at my university, so my family wanted me to have a job that utilized my English skills. However, I could come to Kobe with the understanding of my family, as I strongly wanted to engage in nursing care work in Japan. 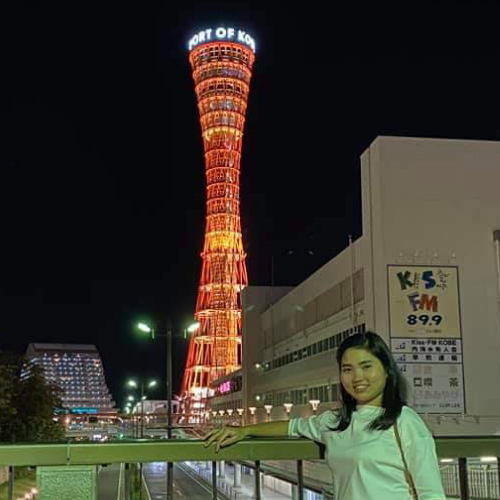 Kobe is a very convenient place with various means of transportations. There are ships, trains, and cars because the sea is here.
What I especially like about Kobe is that it is surrounded by mountains and the sea. Although Tokyo, Osaka, and Hokkaido were also in the list of options for locations for working in Japan which I was introduced, I decided to work in Kobe after hearing the explanation of the person in charge of employment of my current nursing care facility, “Kobe is a wonderful, relaxing city with mountains and the sea.”
I found that to be true when I came to Kobe. There’s a lot of nature here, so I have a refreshing time on my days off strolling along the river and taking pictures. While you’d have to travel far away if you want to enjoy the sea and mountains in Myanmar, it’s a walking distance here in Kobe. I also like going out to Kobe Port Tower and the town of Sannomiya. Besides enjoying shopping, you’ll be rejuvenated seeing the glittering, colorful illuminations and the beautiful night view at night. You can enjoy nature that Myanmar doesn’t have and the city's scenery in Kobe. I believe it's a city with an environment where you can easily concentrate on your work. 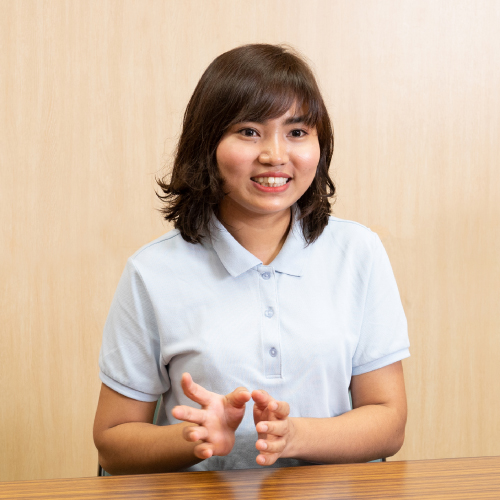 Kobe is a wonderful city. The city offers an array of delicious food, such as cakes, bread, and the famous Kobe beef. There are many places where you can have fun. You can also make different kinds of friends, as there are many non-Japanese citizens.
I was also recommended to live in places other than Kobe when I decided to work in Japan. I was also introduced to larger urban areas with more people. However, I’m happy I chose Kobe. This is because you can befriend people from around the world as many people from various countries come to Kobe to work. I’ve been to Kyoto on a trip sponsored by a technical intern trainee supervision organization.
Through that trip, I could get to know Vietnamese and Indonesians working in Japan like me and become good friends.
My goal is to obtain a care worker qualification while continuing nursing care work in Kobe. In the future, I’d like to bring the nursing care system of Japan to Myanmar. I hope you all will give your best, as working in Japan will surely benefit you and your country's future. 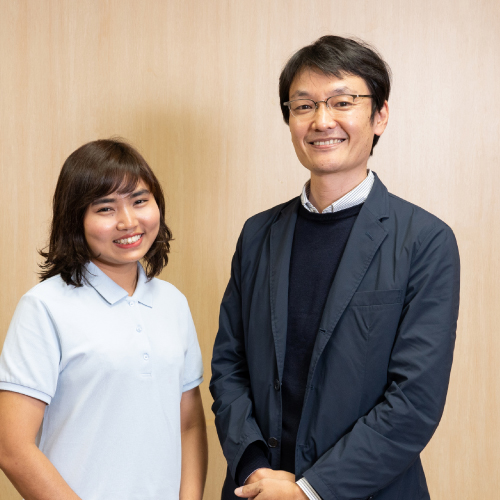 While the lack of nursing care talent has been an issue for a while, there were also opinions at our facility to hire foreign talent. However, we did not put it into action in the beginning due to some opposing opinions. At the same time, I could see the reality that we would have to rely on foreign talent in the future. That’s why I decided to visit a facility that actually employs non-Japanese citizens. I felt that the non-Japanese citizens were brilliant. I thought it was a great step to take and decided to hire them after going to Myanmar myself and observing the foreign talent studying since about two years ago.
We’re now receiving many benefits from hiring foreign talent. First of all, they have an excellent character. Although there is a language barrier, their thoughtfulness and kindness surpass such obstacles. The Japanese staff watching it were also influenced, improving the entire atmosphere of the workplace.
Everyone will be kind to you as Kobe is a port city with many non-Japanese citizens. Please come to Kobe to work with peace of mind as I believe it’s a very comfortable city to live in.
(Deputy Director Kenichi Utsumi)